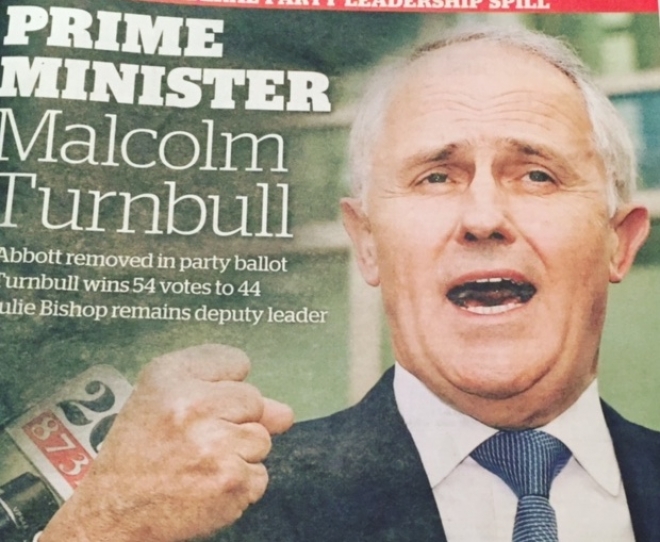 15 Sep
I have a long history watching Malcolm Turnbull. I knew of him from his days as a tech entrepreneur, then later through a friend of mine who was proactive in helping him as part of his greater team of volunteers get into Parliament.

I even flew to Canberra for his Maiden Speech and watched him knowingly that one day he would become Prime Minister of Australia. And he is. Today he is Prime Minister of our amazing country that I am so proud to live in.


Not since John Howard, have I stood up and taken notice. To be honest, I have been a tad embarrassed by the people that followed John Howard. They just didn't seem to have the grace or acumen to be placed in such a stateman-like position. I want, as does everyone, a Prime Minister who we can be proud of.

And today, I can say that although the Liberal Party nearly lost my vote due to the appalling record of late, we have a Prime Minister that we are proud to put on the world stage.

I rememember going to Malcolm and Lucy's house for a fundraiser for the Liberal Party in Point Piper many years ago. Really, when it all just started. He is very smart, articulate, welcoming and above all, able to make a difference.

He doesn't rattle on with bullshit, or fall over at the first sign that someone is going to publicly disagree with him. He stands by his word, and after many years waiting, has achieved the position he always set out to become.

This man is someone everyone can be proud of. He will stand on the world stage and do us proud, with his wife and family alongside, without embarrassment to the public of Australia. He knows how to handle himself and his entire family have worked incredibly hard to build businesses and achieve their phenomenal success that is not an attribute to deals from Government deals, like some other predecessors, but true entrepreneurship with the customer being you and me.

As an entrepreneur Malcolm and Lucy Turnbull stand out. I'm a buddying entrepreneur and can only dream of the heights that this dynamic duo have acheived. What they have done over and over again in business is admirable and then they did it all again in Government, both local and federal.

What we do know is that the Australian dollar just became stronger with the knowledge that Malcolm Turnbull will be named the Prime Minister of Australia.

We also know that his understanding of business is second to none and he hasn't just lived and breathed being a politician like his predecessors, so he understands what it is like to run a business and make sure it not only survives but thrives.

I couldn't be more proud of Australia today and I really hope in our next election that the public forgets the fact that Malcolm and Lucy Turnbull are self-made multi-millionaires, but are in fact our leaders of the future, capable to taking Australia to heights we have never imagined possible.

« Who am I? Do you want to know who Mellissah Smith really is? : 1 Mentor
My list of 10 things that I want in a partner »