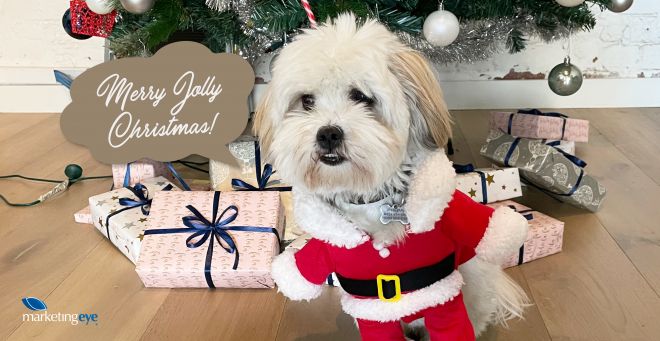 Marketing Eye’s Melbourne office has not been back for long, but that’s not to say it hasn’t been an eventful return to work already…

On Thursday the 26th not a client did stir, say for Jolie the puppy with white fluffy fur.

When the front door opened, she ran, off into the streets just as fast as her little legs can.

Mellissah was heartbroken, not her cheeky baby pup, we were all worried that Jolie’s time may be up.

Alone and afraid, she hadn’t yet learned how to behave, we only hoped that she would be brave.

And so down through the streets of Preston we did search, Kate, Lennia and Phoebe, they all did their research.

Until Jolie was found, at Preston High School, all the kids thought that she was really cool.

For being so cheeky, we’d all thought she’d been a tool, and now we have all agreed, Jolie needs puppy school.

Thank you for listening to the tale of Jolie’s adventure, we here at Marketing Eye hope you have a happy December.
« The Rise of Influencers