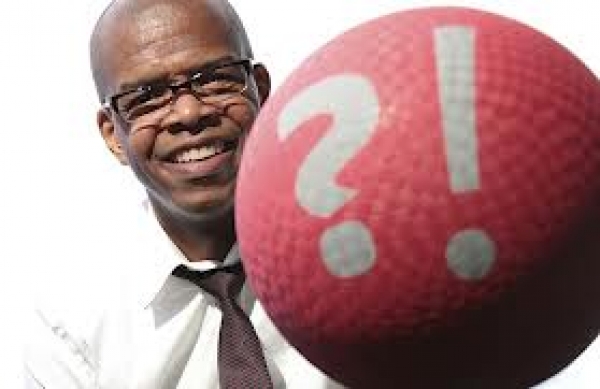 Rules of the Red Rubber Ball

Last night I had the opportunity to attend an event at JWT Atlanta, the best experiential marketing company in Atlanta and one of the most experienced and creative agencies in all of the US.

They put together events every other month, bringing together people from the marketing and advertising industry.

I really enjoy going to their events as they have quality speakers and as a company, JWT Atlanta is as inspiring as any of the people that they have present. Their office space is uber creative and their people, so much fun, that even I want to go and work there.

Yesterday's speaker was Kevin Carroll, the founder of Katalyst. To say that he is inspirational, passionate and above all, a game-changer is an understatement.

He started his presentation with, "You will  take away one nugget of wisdom and for that, I will take away 45 minutes of your time."

If your attitude is adjusted and you have a sense of belonging, connection and of being a catalyst - anything is indeed possible.

Kevin came from the worse possible beginnings. Both of his parents were addicts with his father leaving when he was just three and his mother living a nomad life, sleeping in cars or wherever they possible. He and his three siblings never knew if they would have food each day or water to drink - and at the table wasn't an option. Nothing was constant and all Kevin had was his comfort blanket, the one thing he took everywhere with him that was consistent and never changed.

They moved every other day until one day, it all stopped.

"My brother left one morning and we stopped. We just stopped moving. When he came back that afternoon, he said that he went to first grade and they gave him breakfast and lunch and he learned things. They even gave him homework and I sat with him, so excited that he had been given homework," said Kevin.

Two weeks later, there mother picked him up for school, they jumped in the car and were driven for hours to a trailer. She put them in the trailer with barely enough food or water and told them to not come out until she came back. Days had past and she still didn't come back. They were hungry, so Kevin made the decision to leave the trailer and tell someone - against the wishes of his siblings. If he hadn't told someone that their mother had left them, who knows what might have happened.

A woman put them on a Greyhound bus, even though legally, a 3, 6 and 8 years-old, they could not go on a bus by themselves. They were taken to their grandparents, an elderly couple of where good role models and where they would be safe.

When they arrived, scared for their futures, Kevin asked if he could play in the park. His grandfather said yes.

He walked over to the park and found a ball. He picked up the ball and kicked it as hard as he could. He was angry, concerned, worried and afraid, but the moment he kicked the ball, all he could hear was his foot connecting with the ball and his own heavy breathing - everything else was forgotten in that moment.

A group of children came over and Kevin was once again afraid because he thought he had their ball.

One boy said, "Do you want to play with us kid?"

For the next few hours, they played and Kevin belonged, felt connected and was a plus. He got his smile back. They called him "little-fast" - his first real nickname.

Who's ball is this?

No-one claimed the ball, so Kevin took it home and it became not only his ball, but a symbol. "I got to understand the value of a ball - it was about connecting."

The wisdom that Kevin Carroll shared was:
All it takes is a ball, and you can change the world. Learning to have fun and be playful will only enhance your life experience, make you a better employee or leader and show you the "real" team by your side.

« Are your customers going to buy from you because you're on Twitter?
The way your company wins in the future is very different... »

What SEO Can Do For Your Business

How to Grow Customer Loyalty