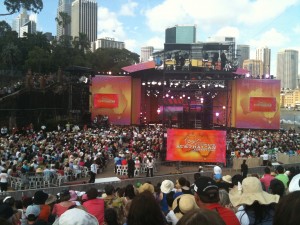 Oprah is in town and unless you have been living under a rock, you not only know she is travelling Australia, but you probably know as much detail as the person next to you.

It’s been a strange phenomena and I think Australia should get a pat on the back for bringing her here. I personally had no idea that she had so many fans – obviously there are alot of daytime television watchers in Australia with a little more time on their hands than myself.

Apparently she is very generous and donated $41 million to charity last year although if you are a billionaire, this is petty cash and a lot less than the interest you would be getting on your money in the bank.

I was lucky enough to be in her morning audience and I must say, there were women everywhere who were crying and in a frenzy of excitement. I can only liken it to how people must have been over the Beatles.

I wasn’t too excited about seeing her, but given that she was in town and everyone was talking about it, I decided to go along.

The lines and lack of comfort didn’t make me a huge fan of being there on the day, but I am not the concert type and only ever go to a concert if I have front row seats (or as close as possible) and have VIP passes for getting in and out of the concert.  A tad spoilt and incredibly selective in where I spend my time has created a monster!

Oprah is a big global brand. She has done not only herself proud, but I think all women are in some way chuffed that she has made such a success of herself.

In the tapings, she plugged her new television station and then every person who she interviewed plugged something. I am talking EVERYONE. Russell Crowe said nothing interesting and for that matter, the interview questions were not exactly tailored to be anything else, but he did promote the Rabbitohs over and over again and he named on international television the 6 or 7 players that attended from the team. Bindi Irwin plugged the park that they own and was such a robot of public speaking training I was appalled. Her brother who was far cuter, didn’t miss a sound bite and was on queue and on message the entire time. He was all of around 5 or 6 years old. I am not sure how this will come up on television, but I was not impressed that these kids were being trained like this at their ages.  Then there was Jay-Z, who I am a BIG fan of, but he was just as bad promoting his book.

There was a good story in all of this of a young family struggling with the affects of cancer on their lives and the heartache and burden that goes with it both from an emotional point of view and a financial point of view. Very sad story but XBox kindly donated $250,000 to them which was nice.

HP and Microsoft kindly donated computers and technology to a school of underprivileged kids as well which was really nice.

Oprah showed how the power of publicity was able to help her convince corporates to be involved. Her time or the time of her staff is the charitable donation she appeared to make on the day. I kind of wished she would have given that $4 million dollars that she made from the Australian Government and Tourism Australia back into local charities – afterall, she can afford to.

Oprah was a show and for many, it was the best show in town. For me, I recognise what an amazing businesswoman she is and how incredible she has been in leveraging celebrity to build a global brand and also associate herself as being incredibly charitable.

But… it didn’t meet my expectations. Maybe I went to the wrong show, maybe my seats weren’t right for me or maybe I can’t be entertained with people ’selling’ stuff and am too cynical when it comes to celebrities coming across as being charitable when they are in fact using other corporates funds.

I’m sure she is charitable, but she is here in our beloved country and it would be nice if a charity like Ozchild received a little donation.