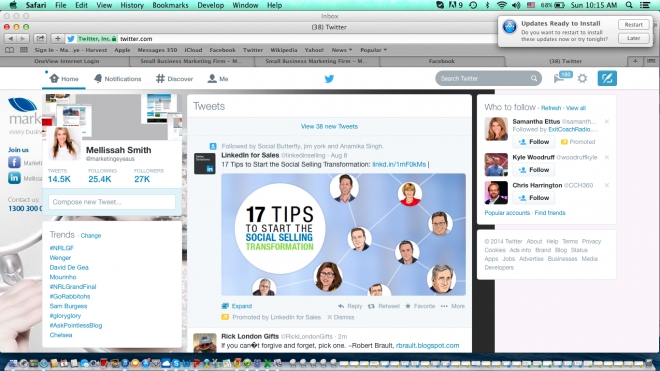 06 Oct
I am sitting in my hotel room in Atlanta reading the New York Times, as I do most Sunday's.

For me, it's the best newspaper in the world, with no other comparing to the ability of the NY Times to cover intelligent, thought-provoking stories that are based on facts, rather than a publicist's spin or worse, a journalist that is just trying to make headlines.

As I read through the business section I came across this:

"Last year, I was let go by a company for which I worked as an independent contractor. In the 16 months I worked there, I followed my immediate supervisor on Twitter and Instagram, and she followed me. Social media was part of my job, and one of the many areas in which I apparently underperformed. I have since found a similar position with a smaller company in the same industry.

However, my old supervisor and I are still follow each other. She does not interact with me, but reading her frequent, chirpy posts reinforces my feelings of having failed. It's a small industry where everyone knows one another, and social media interactions are hierarchical in ways reminiscent of high school. I would like to unfollow her and put her and the company behind me, but I don't want to create drama. What should I do?" Anonymous NYC.

I read this extract over and over again. The format of this story is that a reader writes in and the columnist replies. I also read the reply and the columnist was spot on with explaining this new work paradigm. It has shifted so dramatically and it is painstakingly obvious that leaving one's employ in whatever capacity is a huge risk.

For years I have been writing about my experiences as an entrepreneur and marketing. I talk honestly and openly about both failures and successes. I discuss things that pop up in the office, people that excel at any given moment or relationships with staff members that block my better judgement.

Fundamentally, we are a marketing company and as such all employees are strongly encouraged to follow us on social media and to participate. It's often those who do not that worry me the most because I get concerned that they either have something to hide or don't understand the business we are in. Having said that, I have connected with employees on Facebook only to find that some of their out-of-work antics are not exactly role model behaviour for someone who works in a professional services company. But what do you do? You can't say anything because what they do in their own time is their business - not yours.

Another Facebook message that sent me into a state of uncontrollable frustration was when my niece who works for me, posted an image of herself with a large tattoo on the side of her body. Now, I don't have a problem with people having tattoos, nor do I judge them. In marketing, I think it sets one person apart from another by having something different. But this was different. This was my family. This is someone I consider "my child". She works for me, so as an employer, I could not say anything, and haven't. As a family member, I feel like screaming at her and telling her my real feelings. "Get a tattoo of that size when you are 25, not 18!" "Does it have to be that large?" "You do realise that you now have that sprawled all over your body for the rest of your life?" "You look like an angel - how could you?"

I have had some months now to process my immediate reaction and perhaps as she gets older, she will regret her choices - or maybe she won't. In any case, I love her anyway and it's her choices that ultimately form the person she will become. Being told by social media was the real shock - at the same time as the rest of the world, or at least her 1000 or so friends, and their 1000 or so friends that they shared it with.

Following your peers on social media has good and bad points and it certainly isn't for the faint hearted. Things can be taken out of context and sometimes, people like me, don't think before they write.

My answer to this letter to the New York Times is simple:

"When you leave a job for whatever reason, there are lessons to be learned. You will understand more about yourself by having had this experience and sometimes, for you to 'grieve' the loss of a position, you need to just say goodbye and close off constant reminders. Start afresh. Clean your slate. Other times, by following your previous employers or friends, you can continue to learn and grow, and use it as a 'take home' value proposition. Is there anything you can learn from them by following them on social media? Particularly if you are in the field of social media, is there anything that they are doing that can make you better at your own job. As far as feeling like a failure - don't. You are only that if you didn't learn the lessons you needed to learn, and you play the blame game. Learn what you could have done better and what perhaps you did right, that was overshadowed by what you did wrong. Life is too short to spend time feeling like a "failure" when you can instead use the same energy to be a "success".