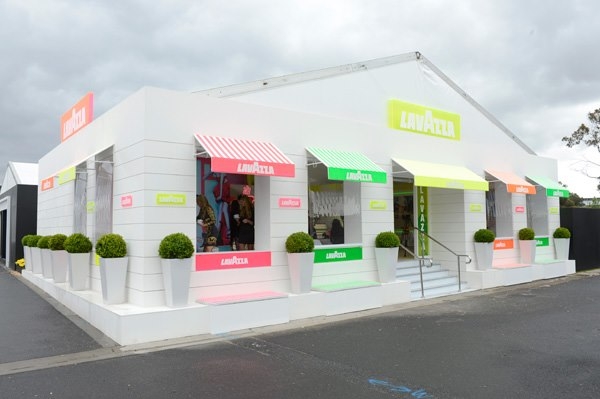 06 Nov
It is "unbeatable". The race that stops a nation.

The 152 Melbourne Cup Carnival promises to be even bigger and better than ever before. More than 100,000 people will go down to Flemington, rain, hail or shine, to watch a race that lasts only minutes.

Swiss took the first prize in the celebrated Birdcage stakes attracting international movie star Nicole Kidman to town for just 24 hours to make an appearance. Lavazza came in a close second, although I do think their birdcage is by far the most fun, with Roberto Cavalli. Love their very "in" fluro accent on the cage this year. Looks very in vogue and no doubt will be part of bringing out the best party in town yet again. They always have a cool DJ playing and a bit of a sing along at the end of the day which draws in the karoake loving celebrities around town.

For Lavazza I think they do an amazing job of standing out from the crowd. It first started with having Rod Stewart's ex as a guest, Rachel Hunter and each year it has gotten bigger and better. I have seen the Madden boys in their a few times, lots of local celebrities and sporting stars. John Valmorbida is the ultimate host and is always as charming as ever.


But it's the race that we come to see and as millions of people around the world place bets on their favourite horse. Some pick by the horse's performance in previous races, or because they just like the name. I pick based on who has trained the horse and who is riding it. Damien Oliver is my bet.

Punters in Australia spend more than a billion dollars betting on this horse race.

Prince Charles and Camilla, Duchess of Cornwall, will give the celebrity-packed spectacle a royal touch. French-trained thoroughbred Americain firmed as the one horse that the punters believe has the best chance of winning but as we all know, that may change as the day goes on. Punters have also backed Luca Cumani's galloper Mount Athos as an equal second favourite alongside last year's winner, Dunaden.

For me the most interesting aspect of this year's race is the use of social media. Saturday, the Twittersphere was alive with accounts of the Derby Day and thousands of pictures were uploaded to Facebook and other social media platforms.

The Melbourne Cup will be no different and will be trending on all social media platforms. This year, watch Pinterest light up with pictures of the race and MySpace will no doubt gain in popularity as the day goes on.

Hope you back a winner!

« Friends are clients and clients are friends : is it sustainable?
How a professional services firm can succeed through content marketing »