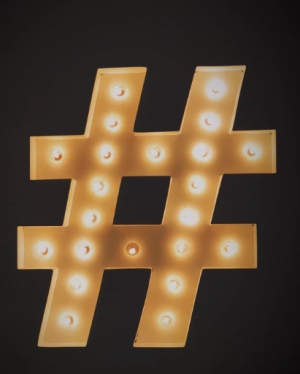 Do hashtags work? Can they increase my businesses following on Instagram? What benefits do they hold?

What is a #hashtag got to do with Twitter?

The hashtag was #businesschicks and #itabuttrose. It's impact was for all to see, as the event was trending somewhere in the social media sphere and people who had never heard of Ita Buttrose from all over the world, were joining the 'trend' and retweeting tweets related to her speech. Such is the power of a #hashtag and of course, my favourite social media platform, Twitter.

What is a hashtag?

A #hashtag is a symbol or a metadata tag used on microblogging social networking sites Twitter, identi.ca and Google that is followed by a keyword phrase without spaces. It ties the conversations of different users into one stream, which you can find by searching the hashtag in Twitter search or by using a third-party monitoring tool like HootSuite.

All tags are case insensitive and can become trending topics if enough people start using it and virally spending the 'word'.

A hashtag can go viral very fast. Take for instance the re-launch of Big Brother. The tweeting went ballistic on Twitter and many popular tweets were displayed during the show. The hashtag #BB trended through the entire episode. Just like when #thevoiceau was on. It trended as did all of the judges. Who didn't tweet something about #joelmadden #keithurban #seal ?

It's hard to judge, but popular hashtags for small businesses are: #smallbusiness #entrepreneur #inspiration #success - make up your own one but make sure it is clever and you never know where it may go.

The reality is that on Twitter or any other medium it is not critical to 'trend' on a topic. What is important is the information that communicate and the story that those 160 characters tell.