How to hit the road running with your next marketing campaign

Don't be fooled to think that in 2013 you have time to waste. Everyone is now faster, smarter, better - all with extraordinary tools at their disposal.

Embarking on global expansion has been the most fascinating experience and in particular, working in what is one of America's most untapped entrepreneurial hubs of Atlanta has not only been rewarding, but also very invigorating.

Atlanta isn't the sleepy town that some of the cities counterparts seem to think it is. In fact, it is quite the opposite. The city is full of promise, spirit and an attitude that is less ruthless than say New York, Chicago, San Francisco or Los Angeles. Behind the politeness and accomodating attitudes of Atlanta's business folk are smart, determined, ambitious and thoroughly capable people who drive small businesses in an endeavour to become big businesses.

Capitalising on an ability to cap salaries and deliver products and services to a national and international audience with America's most proficient transport hub at its disposal, Atlanta entrepeneurs are dreaming big. You heard it right - they are dreaming big. Not too dissimilar to their New York small business friends who have inspired a national through a carefully executed tabloid and magazine advertising campaign that let's the world know that in New York "This is no place to dream small."

What strikes me about the people of Atlanta is their attitude to helping others and in turn, helping themselves. It seems that those who don't come from here, tend to be the one's to watch, whereas if you do business with a true Atlanta local, you are guaranteed that the good old fashion handshake on a deal is exactly that.

Today I had lunch with two talented mergers and acquisition partners at Deloitte. They both are very busy people but were kind enough to take time out of their day to have a chat about business, tax and the run of the land in setting up in Atlanta, buying a home and a motor vehicle. 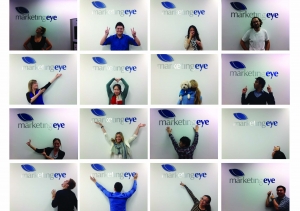 Fostering the right team culture is critical to the success of any business. At Marketing Eye, we try to have fun even though we work seriously hard.
Published in Small Business Marketing
Read more...
Tuesday, 14 June 2011 08:06

None of us is as smart as all of us

Whether you are a big business or a small business, "none of us is as smart as all of us" (ref: Kenneth Blanchard, The One Minute Manager).

Truth be known, I don't think I am very smart at all, but collectively with the talents of my team at Marketing Eye, we help small businesses grow and most of our work is pretty awesome (if you ask me!).